I saw this posted on Facebook by a local news channel. It said, “Can you tell the difference in this photo? One side of this invitation was written by hand, the other using a computer and printer. Is calligraphy worth a quarter of a million dollars? The White House thinks so – that’s what they pay their calligraphy staff every year. We’ll have that story tonight at 5:30. What do you think?” 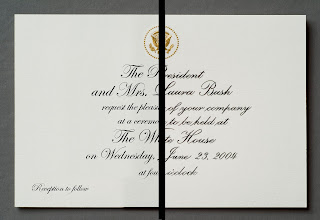 Well, you asked – so here’s what I think…

Let’s start with the biggest problem – They are BOTH computer printed. The one on the right is NOT handlettered. Look at the consistency of the letters – even though grossly kerned. That is NOT hand lettered calligraphy. Neither is the font on the left.

Now for the second problem – This is NOT about being able to tell the difference between computer printing and handlettering! NOT at all. It’s about social etiquette, style, presentation, and custom. I think both these invitations look terrible. But neither one represents the beautiful calligraphy of the White House calligraphers.

Is calligraphy a necessity – no. But neither is fine dining, interior decorating, designer clothing, etc. The question is — where do you draw the line? Focusing on the calligraphers is a rouse – in light of focusing on real areas this government could actually be cutting billions, if not trillions, of dollars.

The third problem – Is calligraphy worth a quarter of a million dollars? This is the combined salary of three calligraphers. A calligrapher with the magnitude of skill to be hired for the social correspondence of the President of the United States has honed her/his skill for a lifetime. There are a handful of people with this type of skill and experience. And I can attest the hours and stress placed upon you when doing this type of work is underestimated. It is both a trade and an art. It also requires critical thinking, time management, endurance, strong grammar, proof checking, and social etiquette skills. These aren’t just people who write fancy. These are educated, intelligent artists.

This touches on the fourth problem – The education of our children and their preparedness, or lack thereof, to function in our world. The majority of children in this country are no longer being taught cursive handwriting. I would dare say the majority can barely print. It won’t be possible for them to endorse anything using a computer or iphone. Their personal mark will be rudimentary at best. That means an entire generation of children are not educated enough to sign their own names let alone practice calligraphy! Steve Jobs said it best regarding the calligraphy class he took, ” It was beautiful, historical, artistically subtle in a way that science can’t capture…” and we all know what impact it had on his life and our society.

I’m not saying everyone needs to study calligraphy. I am saying when we devalue a skill and art, and its place within our civilized society, the trickle down effect has significant consequence.

With that said, I am a calligrapher and I would say in all seriousness, if this government actually had any inkling to make serious budget cuts, then yes, start with the luxuries. But put it in perspective with the job that needs to be done. How much social stationary is produced at the white house daily? How much would someone need to be paid to “run it off the computer?” Would they just be trading one job for another.

There are government social functions EVERY day! There are invitations being sent daily to the highest level of government both in our country and internationally. And it’s not just invitations. The White House sends a congratulatory letter to every person who sends a wedding invitation or birth announcement. There are hand addressed letters of condolence sent to the families of servicemen and servicewomen.

There is social correspondence you couldn’t even dream up. They need name cards and placecards and menus. Who do you think handles all of this? If any of you have ever designed and printed a single invitation for a single party – you know it takes hours! It’s not just click and print. It isn’t Michelle Obama running down to a secretary and asking her/him to run off a few copies of an invite for brunch.

This leads me to the fifth problem – The media. What happened to investigative journalism? What has happened to telling the truth, no matter what? What happened to integrity, fact checking, honesty? It’s pathetic. Real issue aside, this so called “soft” story is based entirely on an INACCURATE photograph! Besides the fact, the issue isn’t about which looks better – calligraphy or computer printing, or can you tell the difference between them. Clearly, no one has even noticed this photograph doesn’t have any calligraphy in it!

I wish the government AND the media would get serious about this issue – the desperate need for a reasonable, logical, workable budget. It seems we really have gone so far, even this most basic management skill is lost.

And so we come to our sixth and final problem – Our country is falling apart at its weary seams. Our babies are being diagnosed with autism at a rate of 1 in 50. Our children are being murdered in their schools. Our families are going bankrupt and losing their homes. Our graduating college students are facing insurmountable debt with no hope for a job. Our veterans are not being cared for and our servicepeople are being robbed of the educations they earned with their blood, sweat, and tears.Our grandparents are dying without proper healthcare, unable to afford medication, or the ability to spend their final days at rest and in peace.

Please forgive me for not worrying about the fancy writing at the White House.