Contemporary Pointed Pen & a Give Away

Well, as you can see – it’s been awhile. We moved in February and I have finally finished setting up my studio. Although I have not finished unpacking boxes! But I can’t wait to share pictures of my studio room! That will have to wait until I can unpack some more and take some decent photos!

In the meantime, I’m really excited to share a class I taught this past weekend for our guild here in Sarasota. The members have a range of experience with pointed pen – from none at all to advanced – so it was difficult to pick a topic. However, most had an interest in learning “contemporary pointed pen” also known as modern calligraphy or even gestural writing, the styles often seen on today’s greeting cards.

I spent four weeks preparing a hand out and I was thrilled to have some fabulous contemporary calligraphers participate by sending me tips to include and examples of their work to share. Thank you so much to Masha at Ornamelle, Molly at Plurabelle, Patricia at Primele, Mara at Neither Snow and Lindsay at Lindsay Letters. A very special thank you to John Stevens at John Stevens Designs who gave me permission to use some of his work from a new book, The Art of Calligraphy and Lettering. This book is a goldmine for calligraphy and hand lettering lovers and I highly recommend it!

I used all recycled materials to put together folders and included some hand-marbled paper – refuge triangles left over from a job I did over 8 years ago for a Mercedes Benz Maybach launch party. I KNEW if I held onto them long enough I would find a way to use them! I just couldn’t throw out those beautiful little triangles and now I’m so glad I didn’t. 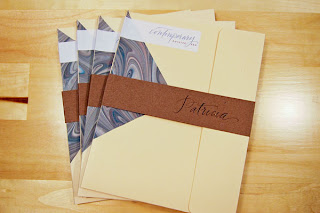 There has been much discussion in blogland about whether some of the styles of modern lettering artists is truly “calligraphy.” In my book, the definition of calligraphy is “the art of beautiful writing” and beauty is always in the eye of the beholder. On dictionary.com, it even simply defines it as, “fancy penmanship.” Some are of the opinion that you must study the traditional hands of calligraphy for years before you can break free and break the rules to do a more contemporary style.

I would suggest those who don’t have previous calligraphy experience may have an advantage in that they are freer to express their own style. There is a free-ness, a fluidity, to these styles which I think is sometimes hard to achieve once you have spent years trying to master the “perfect” letter. It was interesting in class that some of those with years of lettering experience had trouble letting go and integrating their own style into a pointed pen alphabet. And those without lots of formal training had difficulty integrating the thicks and thins of pointed pen into their handwriting.

Master calligraphers like John Stevens clearly have a talent for developing modern styles and his years of experience are reflected in such. Some of the wonderful contemporary lettering artists of today have never had any formal training but have developed beautiful styles which are very popular.

As I said in class, the variety of styles of contemporary pointed pen is virtually limitless. Anyone who reads bridal magazines or looks at lettering in blogland knows our newest lettering artists are some of the hottest around and their styles are the haute couture for those looking for something less traditional but still upscale.  In the end, there is a happy medium out there for everyone (pun intended!).

The final project of the class used a technique from Italian lettering artist Massimo Polello featured in the book, All About techniques in Calligraphy another relatively new calligraphy book with some fabulous advice and work. We used a sea sponge to make a swash of gold paint on fine art paper. Then we lettered a quote using our new contemporary pointed pen style in a variety of directions. The results were beautiful and it was so fun to see the different styles emerge.

Some of my handouts (no, that is not my furry hand but one of my furry friends who refused to move): 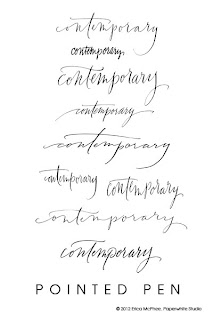 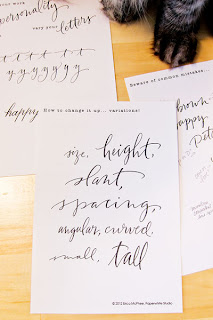 I hope everyone had fun in the class. And for the artists who graciously shared their talent with us, I’ve sent you a package which should arrive by the end of the week. (Hope I didn’t spoil too much of the surprise.) For all you other readers, let me know you are still out there by leaving a comment to enter the give away! I have one extra packet left from the class. I will use a random number picker to choose one lucky letterer to receive a packet! P.S. You don’t have to have any previous pointed pen experience!