Had a very busy weekend – making Halloween costumes! It’s been a tradition since my first born to make costumes every Halloween. Some years the kids forgo it for a store bought one, others they ask for something really elaborate. Either way, whatever makes them happy. I enjoy doing it. If you remember two years ago, I pulled my first all-nighter in many years whipping up two costumes – one for my oldest and one for her bestie.

Well this year, she turned 14 and I figured it’s time for her to stop trick or treating and she insisted she will trick or treat until she dies of old age. I told her if she planned on going she needed a full costume and it’s a fact the older you get, and the less costume you wear, the less people want to give you candy. She insisted she had it under control.

In any event, they decided on Tom and Jerry so I searched through my stash (I practically have a craft store in my front closet so it wasn’t hard). I found some felt, found two headbands, made a pattern, and came up with these. 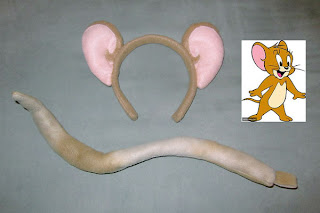 They were delighted. And I had fun making them.
My son, now 10, has left behind Spiderman in lieu of more “serious” Halloween wear. Last year he went as a *really* creepy guy from a video game he isn’t even allowed to play. This year he asked to go as “Ghost” from Modern Warfare 2. Given it was too late to find a balaclava anywhere locally, I whipped up this little number with a dollar’s worth of black stretch fabric and some white acrylic paint. 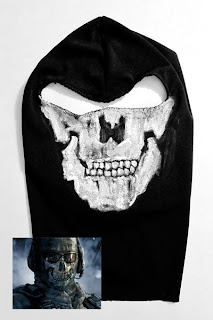 He was utterly amazed and I was really happy with how it came out.
Finally, my youngest, wanted the full blown deal – Mermaid. I purchased a pattern on sale for $1 and $12 worth of fabric and two days later had this. 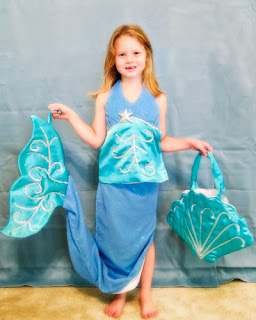 Worth every last minute for that smile!
Hope you all have a safe and