For those of you hoping to only see lettering here, I have to apologize. I was trying to decide if I should separate out my personal projects from my lettering and I finally decided I would keep it altogether. Sorry! You’ll just have to weed through the stuff that doesn’t interest you! 🙂

So this past week my daughter and her best friend decided they wanted to be candy corn witches for their halloween party. This was fine except all the local stores had sold out of the costume and the adult version was wayyyy too risque for my taste and for my 12 year old!
I agreed to make both of their costumes. What was I thinking? Oh, probably the same thing I think any time I am met with a challenge – I can totally do this! It would have been fine except the girls found out they would need me to make the costumes on Friday morning and we were hosting 15 people for dinner for my mom’s birthday on Friday night!
So I ran like a crazy person all day getting stuff done and went to JoAnn’s and bought all the fabric after I sat down and sketched out the idea. This was not easy as I could not find a pattern to modify so I had to wing it all on my own! Yikes!
We had a wonderful dinner party and said goodbye to all of our guests around 10ish. I sat down to the sewing machine and had a 15 hour costume sewing marathon. That’s right – I pulled an all-nighter. I can’t remember when it was exactly but at some point I think around 2, I realized if I went to bed, I would never finish in time for the Halloween party the next day.
So I sewed and cut and measured – wait reverse that. I’m still a little sleep deprived! But … drum roll … I did it! The girls were thrilled. They loved their costumes and I was happy to do it. I crashed at 3:30 in the afternoon and didn’t wake up until 6 o’clock Sunday morning! Phew! What a weekend! But it’s done…
Here is the sketch I did as well as the finished costumes… Hope there are other moms out there as crazy as I am that can appreciate it!
Truly,
Erica 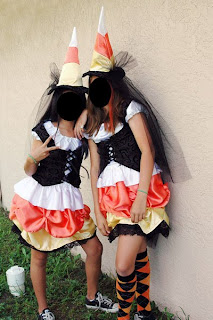