I received a wonderful email from fellow letter-lover Sandi from TN who is learning spencerian. This got me thinking about how I became a lettering artist.

I had always enjoyed drawing but I fell in love with calligraphy around the age of 10. My 5th grade teacher, Mrs. Jacobs, had the sweetest hand writing – the result, she told me, of long hours of practice in Catholic school. I longed to be able to write like her. I was a straight A student with C’s in penmanship! And thus began my true love of lettering. My mom gave me a calligraphy kit for Christmas and I practiced with my markers and fountain pens. Back then the only books I had available were by Ken Brown and Margaret Shepherd. I practically memorized them.

I started getting commissions as I finished up grade school – certificates, programs, yearbook cover, etc. I became fairly adept by high school where I encountered my first real calligraphy teacher (who shall remain nameless) in graphic arts class. I was so happy to have a mentor who also loved calligraphy as much as I did. This would be short-lived as I soon experienced for the first time, the competitive bitterness that can rear its ugly head in the art world.

When we displayed our final projects, another student commented that my lettering was better than the teacher’s. I was embarrassed but pleased at my progress. So I was disappointed when I received a B. When I inquired as to why I had received only a B, the response was, “I’m the only one who gets an A in this class.”

My confidence was shattered and any glimmer of an idea I had of going to art school was extinguished. I gave into the notion I would never be good enough for a career in art. I continued to take art classes in college when I could fit them in. And I continued practicing my calligraphy. I did a few jobs here and there – invitations and certificates in italic. But it was really more of a hobby than anything else.

My senior year in college, I took another hit to the ego when a photography teacher told me my project was “silly” among other nasty things I can’t even write here. It was a very bizarre experience but suffice it to say it reinforced the idea I could never be a “real” artist.

A few years later when I was working in the corporate world,  I received an alumni magazine which featured a story on the same teacher. She was showcasing her work in the university gallery. Or perhaps I should say she was showcasing her version of my work. Yes – she had copied my project. So I reasoned it could not have been *that* bad. With a new perspective, I started practicing both calligraphy and photography with a renewed spirit.

It was the June 1993 issue of Victoria magazine that completely changed my life. I was preparing for my own wedding when I saw the article featuring Maria Thomas’s amazing spencerian invitations. I knew right then and there I *had* to learn how to letter like that. I contacted Maria. I still have (sitting right next to me here in the studio) the package she sent me 17 years ago. Maria put me in touch with Michael Sull who was just finishing up his “Learning to Write Spencerian Script” book.

Michael kindly sold me a photocopied, unedited, stapled version and I was off. I practiced, practiced, practiced. It was love at first sight! I lettered my own invitations for my wedding in June the following year – and poorly I must say. But back then I thought it was wonderful!

Michael gave me the name of another calligrapher, Laura Di Piazza who generously sent me a copy of John Neal’s catalog. I could not believe this entire catalog full of calligraphy stuff existed! Well, I continued practicing and did wedding invitation, diploma, certificate, and envelope jobs on the side. I also took a number of art classes at Maine College of Art, including graphic design classes, while working full time and starting a family. This time I was fortunate enough to have a fantastic design instructor who reinforced the fundamentals and encouraged me greatly.

About 7 years later the insurance company I worked for was bought out. I was in the unique position of being the only person in the company who could do the human resource job position systems transition for all of our 1200+ employees.

Although my position would be eliminated, I was offered a stay bonus to complete the project and a different position afterwards. I became pregnant with my 2nd child just as we finished the acquisition. Long story short, my son had a severe reaction to his first round of immunizations and going back to work FT was completely out of the question. So I decided to quit my job and post an ad for wedding invitations in Martha Stewart Weddings magazine. The stay bonus was enough to continue paying our bills while I got my business up and running.

Well, the business was off with a bang! One of my first clients was a referral from Margaret Shepherd – the very same calligrapher whose books I poured over as a child! I quickly started getting wonderful clients for upscale weddings. The majority of my brides were attorneys living in large cities in the U.S. such as NYC, LA, Houston, etc. I then did a job for Harrison & Shriftman, a high end PR firm, and thus began a string of Hollywood parties and promotional pieces. I really enjoyed this type of work but the stress of deadlines and a child with autism made each day a struggle.

Thankfully, during this time, Casco Bay Scribes, the local calligraphy guild in Portland, Maine, started back up and for the first time ever, I was introduced to friends who shared the same passion I did for hand-lettering. With this came many workshops with very talented calligraphers.

Eventually, I had to stop doing weddings and social invitations. During this time, I was contacted by Marcel Schurman, now Papyrus, to design a Mother’s Day card. I was thrilled! Thus began my adventures in greeting card design. My first greeting card was awful! But they seemed to like it and I started doing more and more.

Over the next few years, I worked to recover my son who experienced a miraculous recovery from autism via homeopathy. I then began studying medicine to become a homeopathic doctor. My third child was born in 2005. I was busy doing logo design for an internet web design company and around this time I began designing for Sunrise Greetings.

In 2007, we moved to FL where the alternative medicine laws do not allow me to practice homeopathy. So I’ve been able to continue with commercial lettering and greeting card design. It has always been a struggle to balance my love for calligraphy, photography, and now homeopathy. I have been fortunate enough to assist some amazing healing. But for right now, it is not the right time to practice. I miss my lettering and hope to immerse myself back into all that is calligraphy!

Phew, that is way more than I intended to write. But there it is… my story of how I came to be a calligrapher … an artist … and very, very happy. 🙂 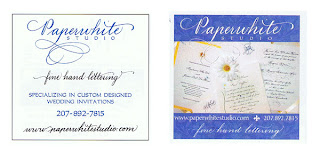 4 thoughts on “The path to calligraphy…”